My grades showed up today! 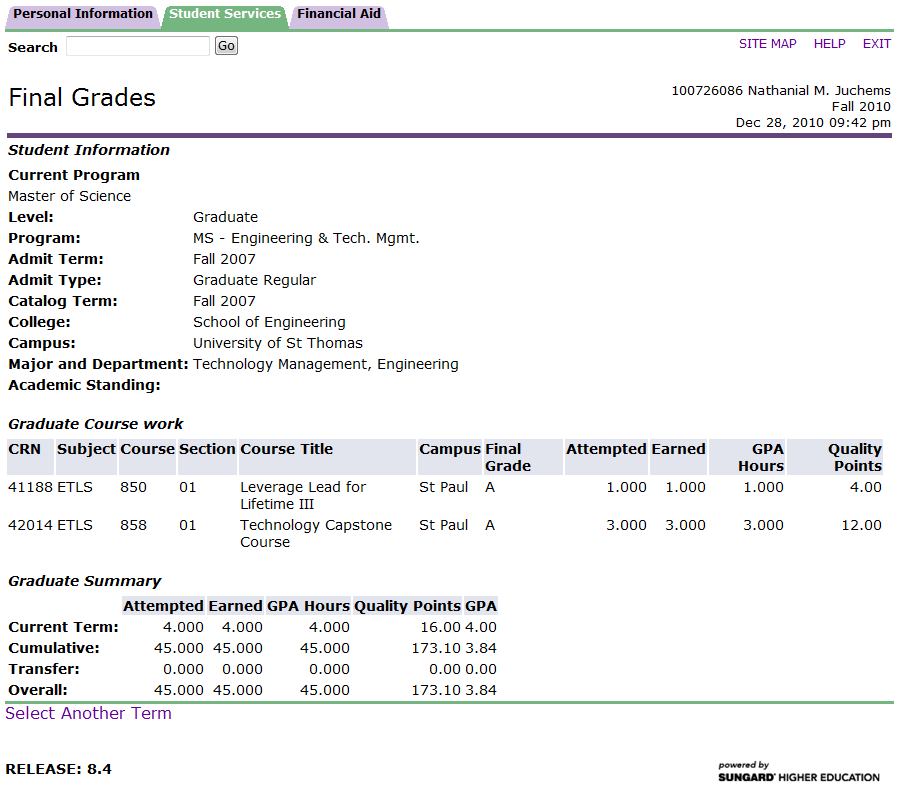 Pretty awesome – and still hard to believe that it is actually over. What a relief!

Last Monday was my last graduate class and it was a relieft to just come home tonight and have no class work on my mind. It is hard to believe that I have jumped through all the hoops, written the papers, taken the tests and done all of the presentations necessary. I remember how daunting the task seemed back during those first two classes. Those first two classes really indicated how things were going to play out, as well.

Strategic Quality Management – awesome class. We learned that there are frameworks for evaluating organizations and this provided a lot of perspective over my company and career. Assigments in this class were thought provoking and challenging. The cemented my desire to experience the entire program and I knew I was in the right place.

Supply Chain Synchronization. What a freaking snoozer of a class! The professor just sat up front and read us the book, we did projects that were only mildly interesting and sickeningly boring to present the rest of the class and I managed to fit my entire final paper onto one page that earned me an A. I only learned the curriculum through my reading of the book during class.

It was about 50/50 for these types of classes and the challenging ones made up for the lack of challenge presented by the others. I am also very critical of classes and can spot missed opportunities much more accurately than I can quantify the value of a class. I would still recommend the degree to anyone, but I will and have been very vocal to others about the classes to take and the ones to skip. Oddly enough, the required classes were mostly very solid and the optional ones were mostly weaker. Interesting how that works out, eh?

WOOOHOOO for being done! 🙂

After careful consideration, Team Juchems has decided that expansion is the next logical step towards world domination.

Kristin and I are pregnant 🙂 That’s the right way to say it, I think, but I have come to accept that I am and will be wrong about a great many things. So it’s possible I botched it 😉

At the predicted recruitment rate we’ll have our first Team Juchems initiate in early June. Frankly, it is still a little bit unreal. From what I have been told, as the non-childbearing one this will likely hold true until the baby is actually born. At that point I have been assured “everything will change” which may or may not mean that I will grow gills and have to breathe underwater.

The baby room is painted, we are working to get that room further into shape tonight and are optimistic about the future. We’ll learn much more during the 70 minute ultrasound coming in January.

During my time at St. Thomas, it has seemed at times that I have been “picked on.” This mainly consists of being held to seemingly higher standard for input than other students and being pushed back upon when turning in assignments. Now, I am aware that I may have some paranoia around how others perceive my performance so I have just written it off based on that up to this point. In a couple of my classes, however, even the other students remarked on it and I started thinking that there might just be something to this perception.

Last night I stayed a bit after class to discuss my final presentation that I had just given with the professor and we got off subject a bit to where he revealed that I am known as one of the “kids” in the program. Going on to explain further, this is not because of my age, which is somewhat unique, but rather that I come to these classes ready to learn and get value. “Bright-eyed” was the defnition, I believe. This is the same professor who last week pulled me aside and gave me some tips on presenting better. At the time, I took it as simple criticism.

Reflecting on this, I think that the professors and adjuncts of my classes have pushed me harder and given me more feedback is that they believe that it is a good investment of their effort. Rather than feeling picked upon, I should be greatful that I am getting more attention and bang for my buck, so to speak, than my peers.

In the moment it is hard to appreciate, though. I have to work better at not reading every criticism as negative.