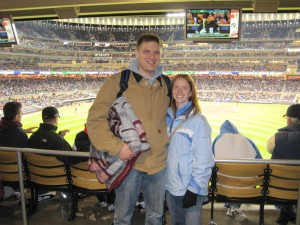 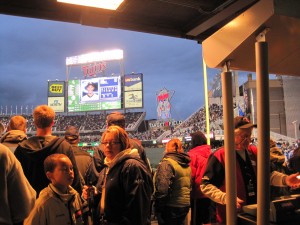 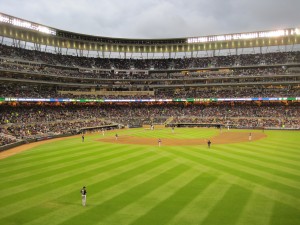 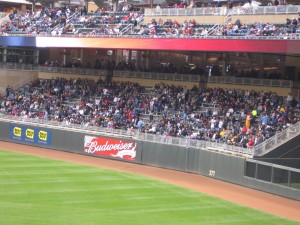 Well folks, its been another weekend that has swept by too fast.  It was great to see so many friends, a huge thanks to everyone we were able to see this weekend.  The big bummer about why we visited with so many friends is that Kristin is going to be in another country and seperated by a huge time differential for seven weeks.  Booo.  Remember you have friends and family here who love and miss you, baby!

There will be upcoming posts about what I am going to be doing to keep myself busy that will sound pretty fun.  The fact of the manner is that most of those things would happen anyway, it would be so much better if Kristin were here through all of them.  Let’s all hope that she has an awesome time 🙂

The Vikings game was a snoozer as predicted, although I think they let the Rams score the most points in a single game that they have scored this season, ten.  Much more unfortunate were the twins being routed in the baseball playoffs.  That means they won’t get a game two here in the cities which has to mean millions of dollars in revenue lost not only to the Twins association but to the surrounding area.  Keeping all those folks here for another two days would be have been huge money.  The best case scenario would have been splitting the first two games with the Yankees.  At that point, Yankees fans would have felt obliged to come to make sure they didn’t miss the final game of the series.  Since New York won the first two games fans knew that no matter what happened, they wouldn’t miss the game where the Yankees had a chance of being eliminated.  Joe Nathan, you blew it.

The Cyclones managed to not win their game either.  It is heartening to see how close they have come the last two games to winning.  This means that wins against Baylor and Colorado should be possible.  Let’s face it, they won two games last year.  Four or five would be giant steps in the right direction.  As we can see in the NFL even more clearly, coaches make or break teams (See Broncos, Titans etc.)  It could be that Iowa State actually has a really decent one on their hands.  A couple bowl apperances with a win would be pretty awesome and make Iowa State known for something more than their tail gating.

Kristin should feel pretty good about beating me at Fantasy Football after giving me crap about not teaching her enough about how it works 🙂  As a matter of fact, she would have beat anyone in our league.  My Pick ’em league also looks darn bleak, eight incorrect choices so far, although it looks like Peyton is giving me my fifth correct pick.  I was pulling for Denver but picked the Patriots.  Doh.  Baltimore!  You lost to Cincinatti!  How horrible!  By far my worst week in that league so far…