Having more and more digital “stuff” that’s somewhat important to retain, I’ve started looking at some solutions.  Already, we put all of our “important” files on our Windows Home Server because it has disk redundancy and is available from anywhere internet is accessible.  Our pictures, tax information, etc. is all stored electronically and it is important that it be protected.  The question then becomes how data is protected from there.

What are we protecting against is probably the first and most important item to detail.  What could happen?

After that, we have to decide how much data loss would be acceptable.  If we could potentially lose thirty days worth of data, is that reasonable?  One day?  One hour?  One year?

In this great age of rapidly expanding storage, I’ve decided to stop throwing things away in a digital sense.  We are talking storage that is under $0.07 per gigabyte.  This means that each 3.5 megabyte picture I retain costs $0.00002.  Someday the real issue will be keeping track of these things, but that is a separate discussion. 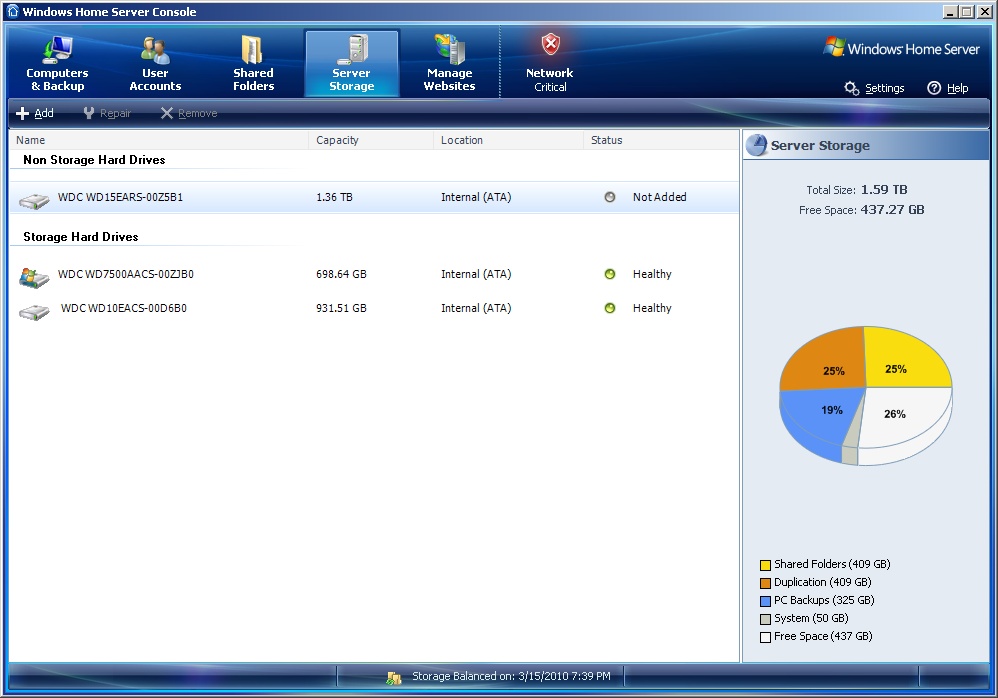 Before, 1.59TB of available space 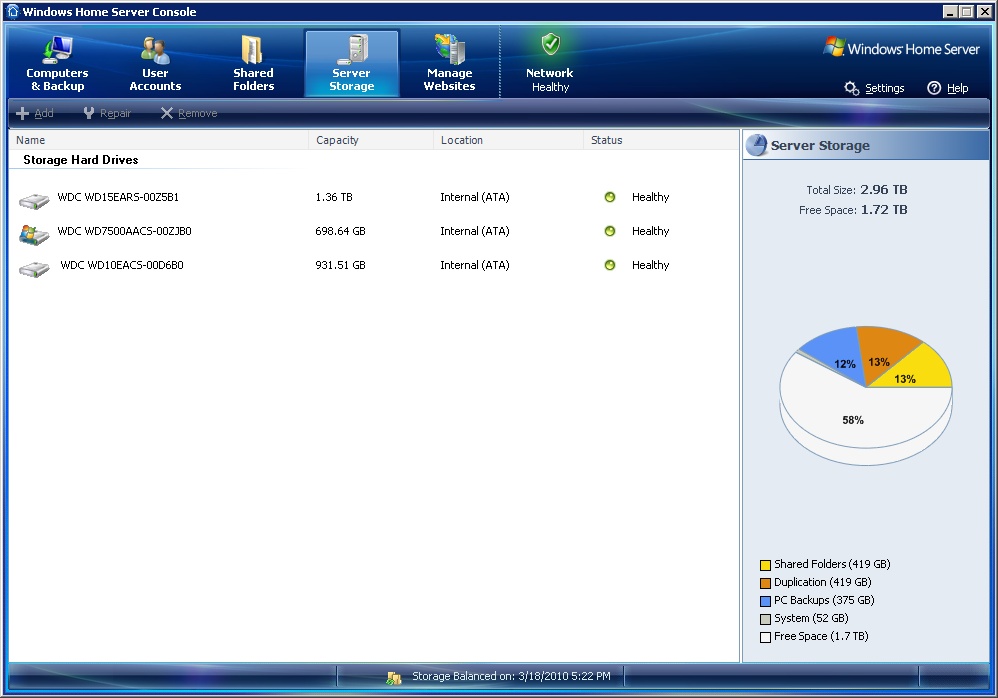 Now, here is the complicated part.  They (the hard drive industry as a whole) are changing how the data is laid out on hard drives that is not very compatible with Windows XP and Server 2003 (which is what WHS is based on.)  There are a number of technological issues at stake here that a number of sources like Ars Technica have covered this in depth so I will spare you that.  Basically, you get bad performance with the new drives on old operating systems – and WHS is effected.

What do you need to do?  Well, you basically have two options.  On most drives, there will be jumpers on there like there were on hard drives for a long time that limited their capacity to 2GB for 16 bit file systems that will fake out the operating system.  The caveat?  You can only have one partition per drive.  If you read the above article, you’ll know that this is intended for big drives, so you’ll be committed to something like a 2TB C: drive if you go that route, which is pretty ugly.

The second option is to use software to “realign” the partition after it has been created which allows for whatever layout you want.  The caveat here?  You could lose your data and any time you redo a partition you are going to be using this software.

Being the idiot I am, I didn’t use the jumper to fake out the operating system and I promptly put data on the drive by adding into the WHS storage pool (which you have to do to get the partition created that you can later realign.)  I tried to go back in and save myself with the bootable software, but this dropped the 1.5TB drive out of the pool and corrupted all my PC backups.  Then I shut it all down and did the jumper thing, which also made WHS freak out until I told it I really wanted to drop the drive out of the pool permanently and added it back in again.

Moral of the story – I wasted about three hours of my life and lost about 300GB of PC backups because I didn’t take time to set the jumper first.  If you are buying a hard drive for WHS or XP in the next few months, you are going to need to be aware of this issue.  Trust me, the jumper is easier and apparently neccessary with WHS as covered in the forums over at www.wegotserved.com.

I am really interested in the new Dell Zino HD.   First, I’d like to point out that it starts at under $250 delivered.  It is like the Mac Mini in form factor, but features better hard drive, memory and graphics card expansion and capacity while also featuring slower processors.  With its combination of outputs, its seems to be the perfect little  box for a media center PC that is mainly used to stream media.  Given its lack of expansion slots, one would be limited to USB TV tuners which is less than optimal.  This is not a huge deal if you’re mainly playing back recorded TV as you would be well served to use your bigger main PC in this case to install your tuners and capture drives.  For Hulu, YouTube and Netflix this guy would be awesome.  A front IR port would have been nice for the use of Media Center remotes and the option for blue tooth for nice wireless accessories. 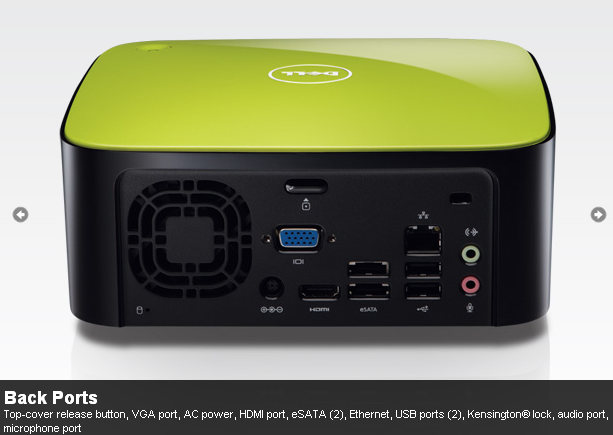 Pretty robust expansion with the eSata ports – this thing would be an *awesome* base for a home server with 65W consumption maximum and the ability to attach eSata drives or multi disk enclosures for just mind boggling expansion along with the prerequisite and surprising at this price point gigabit ethernet.   Note you could would need an HDMI to DVI adapter for most digital panels and that you would need a mini stereo to RCA converter to get the 5.1 digital sound (just like the older Audigy cards) which is a bit of a pain, but at least the options are there.

Options go up to 8GB of ram and a 4330 discrete/separate video card.  These are both luxuries as the integrated graphics are fine and you really don’t need more than 2GB of ram in most user scenarios.  Especially as the CPU choices are pretty slow – the dual core upgrade would be a great one at the current price of $65.  For me that would be the only change I would make as I have easy access to more Windows 7 licenses.  If you are looking to make this into a real media box hooked to a TV, I would go for the 7 upgrade.

Bottom line, if you are looking for a little media box or home server, this is a great option.  Even as an inexpensive desktop, the package is pretty compelling.  Maybe I’ll buy one to check it out 🙂