Much to Kristin’s consternation, I believe, I have played enough Starcraft 2 and gotten good enough to be in the Silver league. I hadn’t played a bronze leaguer in about 20 matches anyway, so no surprise there. It’s pretty interesting all the math that goes into changing your rank – they have a point system, the some “sigma” value that changes over time based on how well you do against other players based on the rank/league differential.

Anyway, check it out 🙂

Supposedly you are put into a league where you are expected to win 50% of the time.  Last night I played eight matches and went 4 & 4, so it looks about right.

Despite my earlier whining about being in the Bronze League of the StarCraft 2 (SC2) ladder, it really does mean that you mostly play other bronze leaguers and recently this has meant that I have been winning.  Fortunately I played my qualification rounds pre-LAN party and I sucked it up.  During the LAN my play improved quite a bit and since the LAN party I am pretty sure that I have lost one 1v1 game while improving my record to 13-8.  That only loss was against a zerg player who took advantage of my building mis-placement to run about twelve zerglings in and ruin my economy right away – oops.

Yesterday was a big day in that  it was the first time since qualifying I played someone from the Silver League, one step up.  The guy was ranked 11th in his league ladder after we played, I don’t know if he was ranked higher previous to that.  Anyway, the game took about ten minutes longer (twice as long!) than a bronze league one, but I still won in the end.  Yay me – I guess.  I am afraid that if I win a few more, it might bump me up a league and I’ll be fighting better players all the time.  Not only is this more time consuming but I am at peace with the fact that I like winning more than I like being super challenged.  I’d rather be 10-1 with the flexibility to make mistakes and not always be on my A-game vs 5-6 and being “challenged.”

September 25th came and went, and StarCraft 2 was played into the ground. 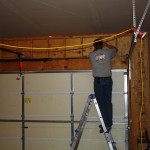 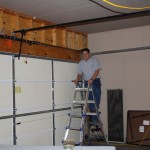 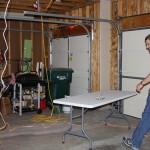 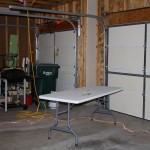 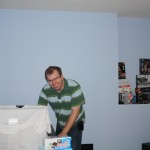 Building a community PC – and happy! 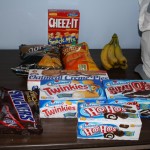 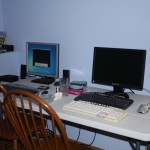 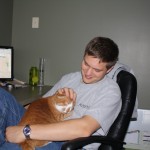 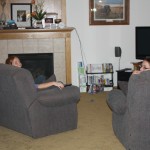 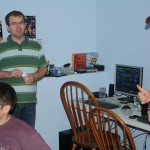 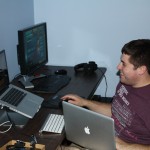 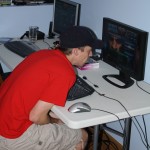 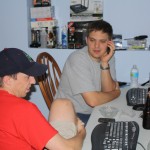 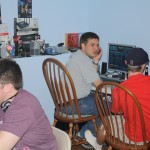 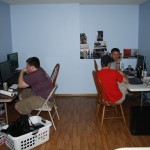 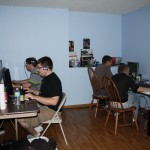 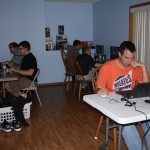 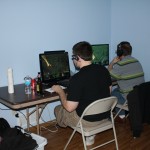 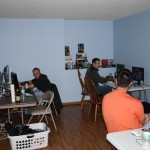 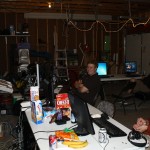 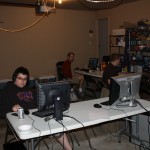 The details of what went down:

Star Craft 2 LAN – Cost will be $15 per cash at the door – this includes pizza (supper/dinner), pop, beer, water, snacks, etc. If you want something really special, please let me know.

Iowa folks, feel free to come up Friday night/Saturday morning and crash where ever there is space for you =) Everyone else – come as early as 1 PM to start setting up if you want. Optimally space for 8-12 – we’ll see how well my home internet connection handles it (hey, it is supposedly a business level service 😉 Planning on having folks sit in two completely separate areas so strategy etc can be discussed openly for the best experience.

Bring your LAN gear – PC, Monitor, keyboard, mouse, ethernet cable, power cables, headphones and optimally a microphone. For the love of all that is holy, if you need a DVI to VGA dongle to make your monitor work, bring it! =D

Have SC2 installed when you come or $60 ready for Blizzard. Either way, have the foresight to setup a battle.net account ahead of time. If you want to get the rust off, there is a fairly regular group that plays from ~9-11 PM Thursday nights, ping me for more detail. For those that are concerned and/or curious , I am hoping to still do a “real” NATLAN this winter featuring games where we shoot each other over and over for hours on end.

That should be enough details, eh?

Over the years, Real Time Strategy games (RTS) have always attracted me, but usually only through the single player campaign.  Often times, I even get board of that and never really finish them completely, alternate campaigns that start you back at “you gain one new unit permission!” have little appeal for me.  One game roped me into competitive online play, Dune 2000.

Dune 2000 wasn’t a phenomenal game by any reach of the imagination and bore much in common with Command and Conquer.  On the ol’ dial up and the original family Gateway (Windows 98SE, Celeron 300, 3GB hard drive, 64MB of ram and a screaming for the time 12MB Voodoo2 graphics card) I would play into the wee hours of the morning during high school.  There was a ladder and typically I was in the middle, the highlight of my experience there was a dramatic victory over the 13th ranked player that I could bore you with the details sometime.  By far, that has to be the most played RTS game for me, ever.

I enjoyed the original Starcraft, but to be honest I was late to the party, the game looked old and I never finished Brood Wars, the expansion.  As for multilayer, I played against other real people exactly one time in a ranked Battle.net match where I obliterated some random internet guy (kid?) who accused me of cheating with a good amount of profanity thrown in.  This was a good way to start – and a good way to end.

A big reason for me shying away from the online multilayer aspect of RTS games is the intensity that the one on one matches bring to the table.  As some of you may know, I like to play games competitively, sometimes to a fault.  I know better, but often times my brain equates fun with winning and that drives me while playing.  Out in the rest of the world, people are really good at these RTS games and playing against them can be a lesson in futility and frustration if you allow it to be.   In Dune 2000, I got to the point where I had a “build order” and a strategy, and played it enough that I just knew what the other player was up to frequently by what units I would see early in the game.  It probably helped that I was in the game playing/learning highpoint of my life, being 15 or so.

Out comes Star Craft 2.  I’ll admit I got caught up in the hype of it, and like Diablo 2 it was purchased Day 1 of its general availability.  Heck, the collectors edition is currently on my desk, complete with its thumb drive containing all of SC1 amongst other nifty things.   Anyway, for the first time really, I knew a bunch of people who had also purchased it and were playing as a group regularly (Thursday night, 9PM for those interested) and this helped take the edge off of playing online.  Dan T. played a 2v2 online match with me versus the great unknown, and thus scary, others on the Internet.

Emboldened by this, I played through the prerequisite five placement matches on the SC2 ladder (there is a very robust, continuous ranking system in place online)  and manage to win one and lose four very tense matches.  This got me placed into the “Bronze” league.  The bottom one out of five.  Which is fine, really, because I thought that meant I would play only against other Bronze level players.  Wrong.  You get automagically placed against anyone looking to play, and that can include Diamond players, way up there at the tippy top.  The type of gamers who play SC2 as a job.  Suffice to say, I lost three more matches and then, finally winning one.  This was a good time to wrap up my play for a while.

In the meantime I started watching Day9 daily over lunch after reading an article at Ars.  In the comments of the article, his feed was mentioned as one that focused on improvement over entertainment value.  I have found that true – and have one my last two ladder matches pretty convincingly against folks that I was “slightly favored” over.  Terminology and lingo have also been valuable information gleaned from his daily broadcasts.

In closing, I promise to the people coming to the LAN party that I am not going to 2 gate-Robo into 2 base 8-gate and rush you with speed Zealots every game.  Unless I start losing. 😛

And if you know what that means, I am sure you’ll be able to neutralize it 🙂