Running Windows update with the Zune software installed gets you a little point release upgrade.  Ars Technica is all excited about how this software added some mysterious phone support.  Myself, I am thrilled that xvid, avi, and divx are all recognized by the player!  Even though they have to be re-encoded to work on the Zune, they now show up in the library and the re-encode is handled natively by the Zune software which uses at least two cores and seems to give good audio/video quality.  Previously, I had to re-encode all the crap from the internet into .mp4 or .wmv manually and separately.  This additional codec support is going to be a huge time and effort saver for me.  Evidently the Zune HD will play these files back natively in the future, which would be perfect.  With anyluck, they’ll support .mkv files in the next few months too, totally eliminating all that messy manual re-encoding 🙂

Which, incidentally, brings me to the big new iPad.  Its codec support is pretty sucktastic and speaks to how tightly integrated it will have to be with iTunes to get crap onto that device.  It really is just a big iPod touch…  it gets less and less cool the more I think about it.

With the big trip to Manila looming and the lack of a smart phone seriously reducing the level of technology I have been carrying around, I decided to take a peek at Craigslist for either the smaller flash Zunes or an even older 30GB hard drive based model.  I found an ugly yet functional brown 30GB Zune right in downtown St. Paul, I met the guy over lunch and I now have a Zune of my own.  Why a Zune?  Here is my top ten list:

2. Even the oldest Zunes are feature complete – they keep getting new firmware.  Try that with your iPod.

3.  The Zune Pass.  $15 a month, you get unlimited music from the Zune store PLUS you get to *buy/keep* 10 tracks a month.  You can have this used by up to three Zunes and three PCs simultaneously.

5.  It is not an iPod.  I can hook it up to a bunch of different PC’s to sync music to it and evidently from it.  I’ll be testing this out more later.

6. FM + FM tune tagging.  I like listening to the 93x morning show and *if* I get the Zune pass, I like the idea of just snagging a song title on the way into work and having it automatically pull the song down when I get to work.  I’ll be taking the bus to work soon and this should work out nicely.

7.  Pretty big screen for video and a solid amount of storage.

8.  Wireless syncing for leaving it in the car yet having new music put on it. 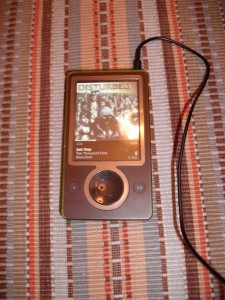 Do you see how well it coordinates with our fall placemats? Priceless!

PS:  Not an iPod.  This me showing my nonconformity.   That’s right, by choosing Microsoft.