and thoughts in my head…

For a number of years now I have been involved in the memorial business. This involvement meant immersion in memorial products, how they work and the stories of the people who came to buy them. What I didn’t realize was how little about what happens to our bodies after we die that I understood. The book Smoke Gets In Your Eyes by Caitlin Doughty did more than make my eyes water, it opened my mind to how I want – and maybe as importantly, do not want – my body to be handled after I no longer need it.

END_OF_DOCUMENT_TOKEN_TO_BE_REPLACED

There is only so much stuff a guy can keep, right?

Kristin and I are clearing out some of our high school era memories and deciding how best we can move on.

I have decided that for some things, a picture will suffice.  A tub of trophies is getting sent to the garbage, but first let’s relive my participation in the Bremer County Fair Crops competitions… 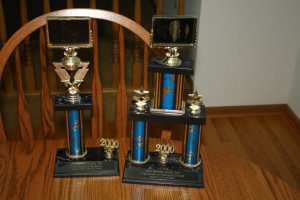 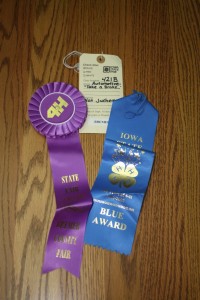 The last project there was for my exhibit on the differences between disc and drums breaks and how they worked.  Unfortunately, I think it may have cost some misplaced Chevelle parts at this point…

Sadly these items must go, but it was fun remembering talking to the judges and getting the awards!

Every once in a while when building a new ESX (not ESXi, mind you) server you don’t really know which of your multiple connections is bound to the switch that will work for your service console if you are lucky (?) enough to have your networking interfaces all separated out.

Well, here is just the bit of code to run at the command line to try several different vmnic uplinks in quick succession:

Iterate through your vmnics until you can ping out and voila, all better!

While researching a very technical question, I ran across this blog:

Of course, the first thing I did was search for the keyword I was googling – only later did I scroll up and read the top post.

Warning – its a huge time waster.  If you thought you could waste time on Wikipedia, look out.  Futhermore, if you do not wish to see the guts of TV shows and other media laid out for you to see, analyze and amuse yourself thereby, this isn’t going to be a great site for you.

One of my favorite pages so far:

http://tvtropes.org/pmwiki/pmwiki.php/Main/HowNotToWriteANovel – not even related to TV, but hilarious and so true 🙂

Kristin and I snagged this from Red-Box on Blu-Ray along with a couple $1 sundaes (quite tasty, thank you for asking) and it wasn’t really the best material for a Saturday night movie.  It didn’t feature any really famous people, it wasn’t particularly uplifting and it will force Kristin and I to consider unpleasant aspects of the future life of our unborn son.  That sad, get off your tush and spend a couple of hours considering the future of our nation.   If you or some one you would watch with is affiliated with a teachers union, you’d likely want to get an idea how they might feel about being painted as the main antagonist in the battle for change in the education system.

Basically, the premise of the movie is that our education system is “broken.”  It was great through about the first three quarters of the 1900’s simply given the fact that we had an inclusive education system that managed to graduate enough college prepped students to keep our engineering and science professions supplied with talent, refuel the education system itself and let the rest find their way.  In the meantime, the strength of economy has begun a very serious shift away from jobs for the minimally educated (manufacturing, etc.) to to those that require a high level of specialization (Information Age) to perform.

The movie is pretty alarming, indicating that no matter where you go, your children who attend public school are unlikely to be prepared for college even if they do finish high school.  I was interested in this and so dug up a census bureau report, linked to from this wikipedia article.  This report reveals that even though just slightly less than 90% of  my current peers graduate high school, less than 30% of them have college degrees.  Is this due to financial reasons?  Maybe?  It could also be, as the movie insinuates, the typical high school graduate is not ready for college.   Something to think about, however.

When you take a gander at that Wikipedia article, look at how much of a difference a degree makes in income and in unemployment rates.  Individual earning (and thus, spending) potential is an item of great concern as we look to the next twenty or so years.  We will have to outspend other developing countries (China) for sparse resources like oil and this is dependent on individuals being able to pay a lot at the pump.  It is clear that many other countries are pumping more highly educated young people than the U.S. currently is – if we care about future generations we should try to close the gap.

In the end, it is supposed to be a motivational documentary so it is going to be a little incendiary.  Hopefully it will get you to do some research, where you are likely to find that things aren’t as bad as a broken down bronx neighborhood school in your hometown – but that things could be quite a bit better, too.

I hope you ordered that $500 worth stuff from NewEgg shipped to your house.  That charge from USPS?  Glad that got denied, guess you’ll have to try another card to ship your crap.

Now I get to hope my scheduled payment happens because I can no longer see my credit card info online.  The auto-payment for T-Mobile, Comcast and other accounts now needs to be changed.  What a waste of my time.

As we proceed in the digital age more and more we are leaving behind our home phone lines and moving towards cell phones.  There are many reasons why you may still want a useful home phone line, however.  For things like calling for 800 support lines where you might burn an hour or so, mostly waiting on hold, for example.  Or if you are trying to carry a minimum of minutes on your cell phone plan or want to be able to dial 911 without hunting down your cell phone in an emergency situation.  Sometimes it can just be nice to use a normal phone instead of trying to rely on potentially spotty wireless coverage in your home.

Traditionally, you would have been tied to the phone company and an expensive minimum fee for your phone line.  With the internet, companies like Vonage and Ooma have started to provide services that utilize the Internet to carry your voice across the country.  This eliminated the concept of domestic long distance but you are saddled with typically either a big upfront cost (Ooma ~$200) or a still sizable monthly bill (Vonage).  Furthermore, some companies that gave a decent multi-year contract price (SunRocket) have gone out of business due to how easy it is to get into the business versus the old phone line model.  Magic Jack was a revolutionary product that allowed you to use a PC for a home phone.  It was/is cheap, but the quality of service and customer support have long been suspect.

Now, for the more tech savvy, you can get the reliability of small business equipment with the call quality of an established VOIP provider on a month to month and minutes used basis.

First, you take this:

Add a handset and an hour or so for getting your existing router and your new VOIP gateway configured and presto-change-o you are in business.   As near as I can tell, with voip.ms you simply have a minimum of $25 of credit in your account and you pay about 1.25 cents per minute.  So if you use your phone for 100 minutes per month, that’d be a whopping $1.25.  Outbound calls to “toll free” numbers are indeed free.  Plus, you get all the fancy caller-id and features you might normally pay extra for.

You don’t need to plug a phone directly into the VOIP router – you can just plug it into your existing phone line wiring where you might normally plug in a phone and all the other jacks in your home can then be used for handsets.

Potentially, you could spend $50 on the router, add $50 to you account, use an existing handset and not pay for your home service for quite some time.

A couple years ago I picked up a discarded “First Book on Investing” published in the ripe year of 1994. Some things have undoubtedly changed since then (interest rates! Wow!) but many basics then are still essential basics to understand now.

When you get dividends you have to pay taxes on them, even if they are reinvested. If you had couple hundred thousand saved up and mutual funds this could be quite a burden and is one of the reasons that tax deferred accounts like 401ks and special funds like Roth IRAs are so magical. When looking at retirement investing, these types of investments cannot be overlooked or undervalued. For medium term investing there are mutual funds built to avoid taxes as well.

Any fund you invest in should have no “load” or “exit” fees, these are bunk. There are plenty of really low cost funds out there that perform well. We reviewed our investments and discover one that had a 3% load fee. Every time we put money in, they took 3% off the top! Its pretty hard to earn that back, especially in todays world of low interest rates.

It is also worthwhile to see if you can take loans against your investments (not 401k, but the medium term ones) and how much they might cost. It could be a good alternative against a home equity loan (which is really just another way to leverage an investment…)

Finally, the early 90’s had crazy interest rates. 9% interest on a CD? I can only imagine how much it must have cost to borrow money!

This morning I was starving, withering away at my desk. It is more than likely this was a by product of dehydration versus actual hunger, “drink more water!” as Kristin would say. Convinced of my hunger by a persuasive stomach and frustrated with a work issue that has over stayed its welcome that was making me antsy sitting at my desk, I headed on down to Chipotle for a bag of their incredibly tasty chips and corn salsa. Costing around two dollars, this is really about the best you can do without leaving the Lawson building and get some actual food-like snack.  Arriving as they unlocked their doors at 10:30, I was the first and only customer in line and many of the workers were still eating in the booths near the counter.

Our Chipotle, mentioned here, has recently gotten much less Latino so the faces there are largely new.   Imagine my surprise when the check out guy spread his arms, smiled, and said the chips and salsa where on him today.  I was incredulous – but he assured me he was serious.  With much thanks, I left the store and no one tackled me on the way out.

What a great turn of events though!  My morning has improved immensely from his act of kindness – which assures that I will also be coming back to that Chipotle in the future.  Free food, it makes me happy…