Just a couple nights ago, Gabe and I were chilling out on the main floor while Kristin was upstairs. Just before going upstairs, she had decided that we would try to keep our pantry, full height cupboard closed with the rings that snap together as the velcro loop was a slight PITA.

Doing his thing, Gabe walked over there and pulled down on the rings, causing them to come off. You are supposed to pick you battles with your toddler according to the Internet, so I just followed him and stood a couple feet away, observing. He pulled out of the pantry a big bag of candy that we had purchased after Halloween either last year or the year before, inside it had a jumble of mini-bags of Skittles, double packs of Starbursts and then a variety of other candy that had been consolidated into it.

He loves this bag, it is always the first thing he takes out if he opens the right hand door. Pulling it out for the umpteenth time, he sat down with his legs sprawled out on either side of the bag. He reached in and grabbed a bag of Swedish Fish, which he carefully laid on the ground beside him. Next up was a bag of Skittles. I asked him if I could have it, and he held it out for me. I took it, and that’s when a little magic happened.

He made the “more” sign to me, he eyes asking the question. I said yes, I would like more, and made the sign back to him. He proceeded to hand me five or six more bags of Skittles until he hit gold, a Starburst. He put the Swedish Fish back in the bag, picked the bag back up and put it back in the pantry. Then he shut the pantry door and went off, Starburst clutched tightly in his fist.

Maybe it was a little thing, but that bit of back and forth communication, and him wondering what I wanted, well, it was very special couple of minutes.

We (I) slept in to 10 am this morning. We’ve been cleaning, organizing, and preparing. We’ve been taking it easy, minimizing stress and tension. We’ve watched almost all of season six of The Office this week, we should be able to finish it today. We’ve made a good dent in our ice cream reserves. We’ve enjoyed quiet time at home together and impulsively going out shopping or to a restaurant.

More and more, it looks like it is all going to really get started at 7 am tomorrow. Maybe some of those things above will change, but I couldn’t be more excited!

From time to time while cruising through the internet I find something new.  This week I stumbled upon the “vgcats” comic, and after getting to this one,  I couldn’t help but share.  In an unrelated incident, I also found this poster which I find nearly endlessly amusing: 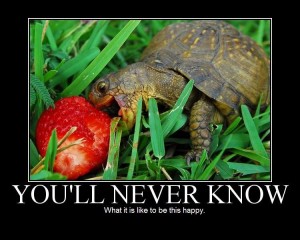 Lastly, it’s been four years that Kristin I have been married!  How fast good times go by…  and only four weeks until we are supposed to continue the TeamJuchems expansion with a baby boy, which is also just freaking crazy.  It does seem like Kristin has been pregnant about forever…

After careful consideration, Team Juchems has decided that expansion is the next logical step towards world domination.

Kristin and I are pregnant 🙂 That’s the right way to say it, I think, but I have come to accept that I am and will be wrong about a great many things. So it’s possible I botched it 😉

At the predicted recruitment rate we’ll have our first Team Juchems initiate in early June. Frankly, it is still a little bit unreal. From what I have been told, as the non-childbearing one this will likely hold true until the baby is actually born. At that point I have been assured “everything will change” which may or may not mean that I will grow gills and have to breathe underwater.

The baby room is painted, we are working to get that room further into shape tonight and are optimistic about the future. We’ll learn much more during the 70 minute ultrasound coming in January.