Well, it looks like I misplaced my vote in the 2010 elections – and it could have been a huge loss for not only myself but perhaps the country. Luckily, Al Franken was still elected as Minnesota’s Senator and he is there now actually championing some legislation that is good for the people and not the folks with fat wallets who can write checks to support campaigns.

This article over at Ars Technica pretty well sums it up:

Net Neutrality (NN) is a necessity with the way that communications companies are currently government protected monopolies.  It is what keeps Comcast and the like from charging an extra $3 a month for netflix, $1 per month for Skype, etc.  It keeps the pipe to your house free for using how you see fit for the one price you pay for it.  Without NN, the internet will be fragmented as pay walls are erected and those without the means to pay will be stuck with some subset of the Internet.

Franken has worked with another Senator to write a concise, readable piece of legislation that we want to see passed.  Really, we do – as your resident technologist, don’t believe rhetoric that tries to paint any other picture.

This morning I was starving, withering away at my desk. It is more than likely this was a by product of dehydration versus actual hunger, “drink more water!” as Kristin would say. Convinced of my hunger by a persuasive stomach and frustrated with a work issue that has over stayed its welcome that was making me antsy sitting at my desk, I headed on down to Chipotle for a bag of their incredibly tasty chips and corn salsa. Costing around two dollars, this is really about the best you can do without leaving the Lawson building and get some actual food-like snack.  Arriving as they unlocked their doors at 10:30, I was the first and only customer in line and many of the workers were still eating in the booths near the counter.

Our Chipotle, mentioned here, has recently gotten much less Latino so the faces there are largely new.   Imagine my surprise when the check out guy spread his arms, smiled, and said the chips and salsa where on him today.  I was incredulous – but he assured me he was serious.  With much thanks, I left the store and no one tackled me on the way out.

What a great turn of events though!  My morning has improved immensely from his act of kindness – which assures that I will also be coming back to that Chipotle in the future.  Free food, it makes me happy…

Working on getting RHEL virtual appliances setup in the Amazon cloud this is how you resize the root filesystem after taking a snapshot of the original, creating a larger EBS from the snap, removing the old /dev/sda and attaching the EBS volume you just created.

I have had success using a similar method in Ubuntu, but then you have to be careful to leave the boot area and removing the swap partition first. Take a screenshot of fdisk -l /dev/sda before you start mucking around – you’ll be glad you did 🙂

First off, the theater room had an organizer I had purchased about six months ago from woot.com but had never assembled and installed.  As you can see, it does work but I would never buy a glass shelf/single rear pillar setup ever again.  Getting it leveled was a bear. 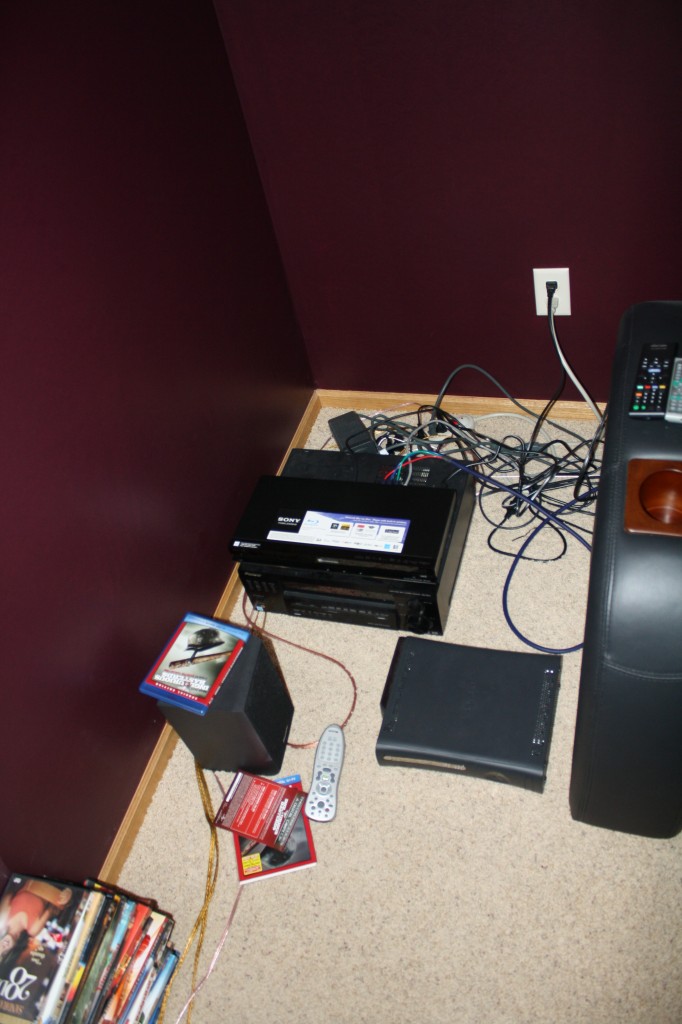 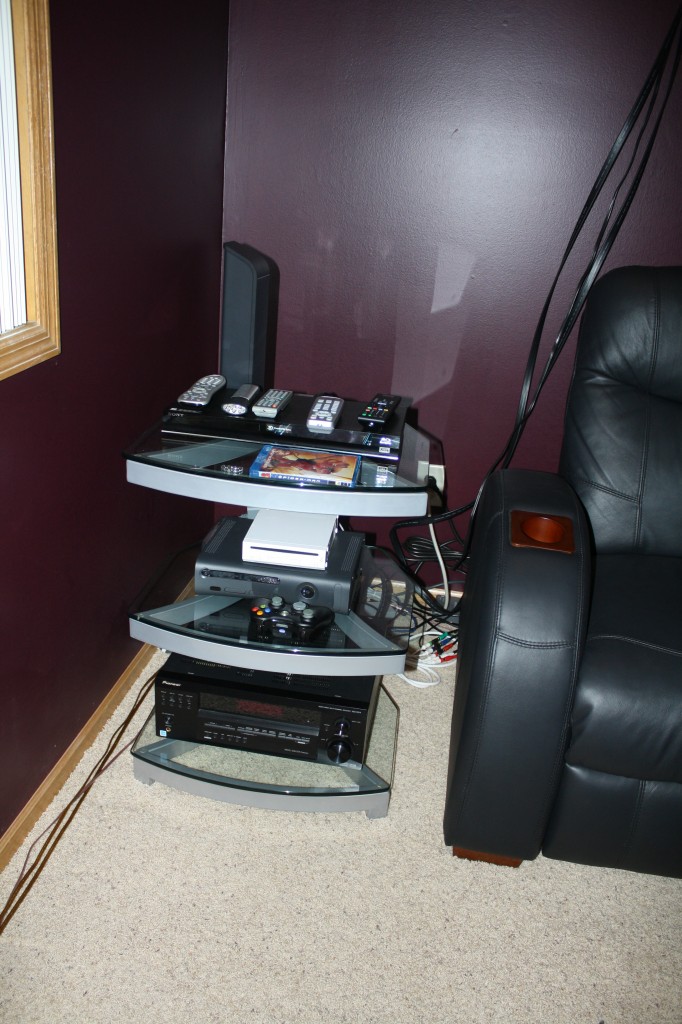 The last week or so the room has really be set straight.  It has gone from a stressfully messy room to one that I really enjoy spending time in.  Of course, the new projector you can see in this picture helps!  More on that in a follow up piece… 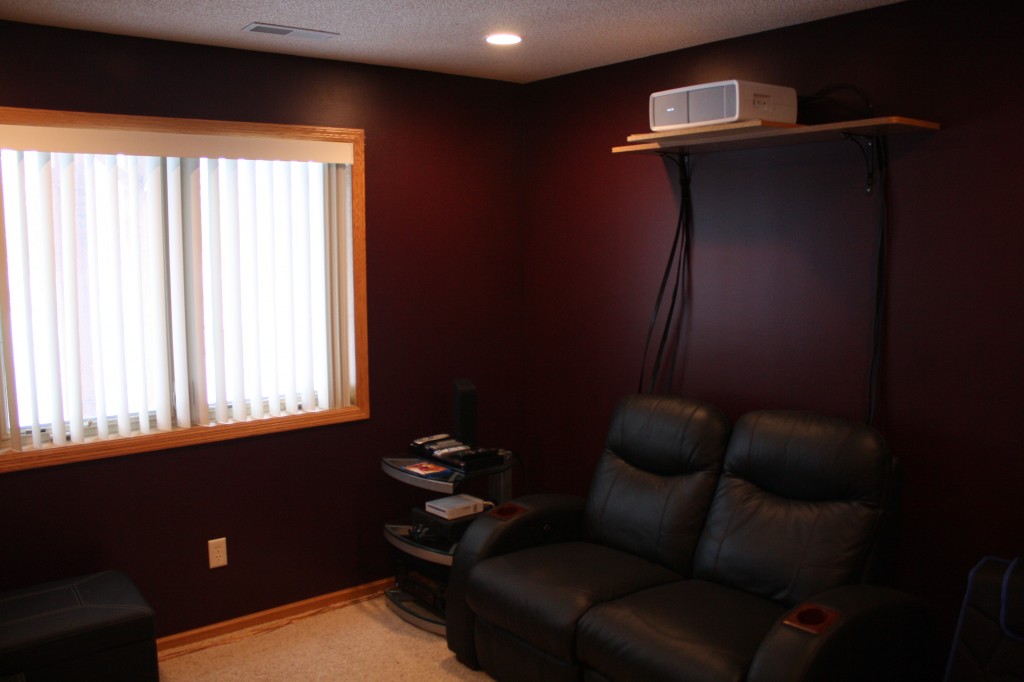 More of the room. Windows open for max photo light...

When my mom and dad were up for new years, they helped me to kick off a couple of projects that I had been contemplating – and putting off – for some time.  The first was installing some shelves into the weird wall indent we have in our basement. 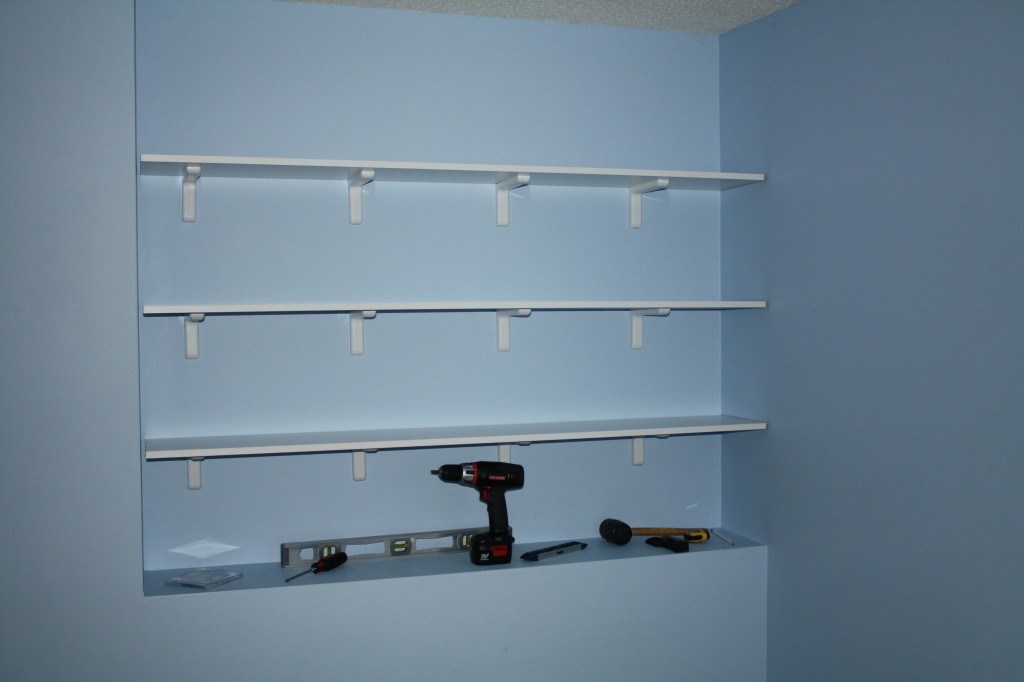 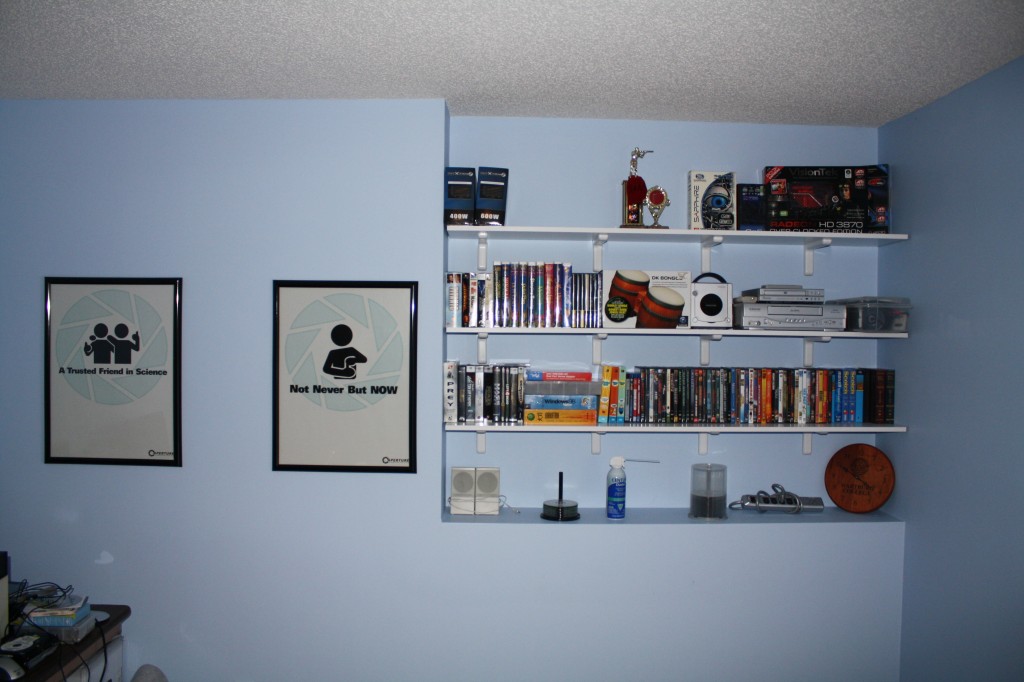 Next was a “tank topper” for the main floor bathroom.  Since under the sink is dominated by cat supplies, it will provide a place to keep necessities like extra toilet paper and consolidate our medicine supplies into one location.  We got it at Home Depot and it has Oak Facing and while that is nice, it only came with two internal shelves and one of them is the bottom of the upper chamber.  In order to get the shelves as seen we bought a couple extra oak boards and I used a neighbors saws to trim them to the right size.  They are easy to pick out as the bottom shelf due to the fact we haven’t stained them yet.  We are waiting for warmer weather for that.  I was glad to have had cabinet hanging experience as it didn’t come with directions or screws.  We also had to put the towel ring on there as the other prime real estate is consumed by the vent work for the air exchanger.  The final touch was some clearance knobs for the doors from Lowes that better matched the brush nickel towel ring. 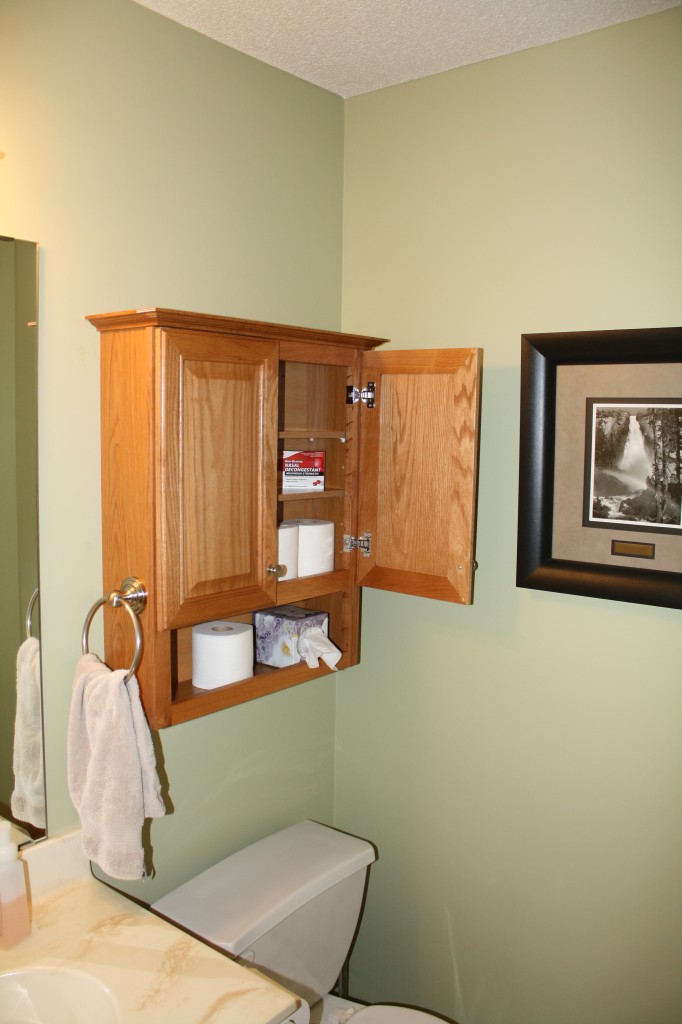 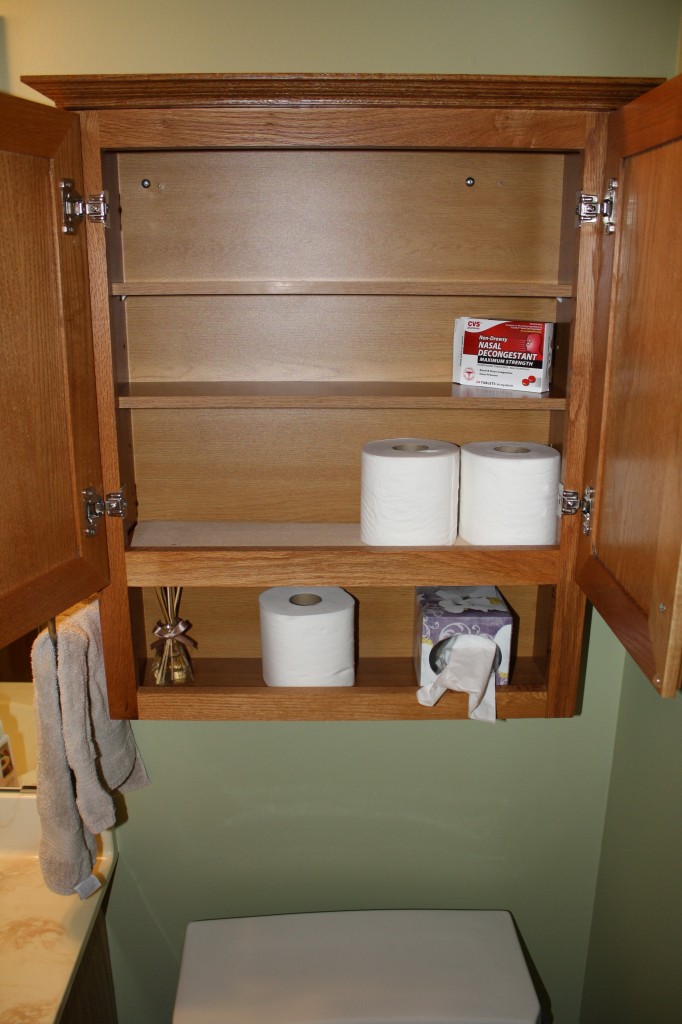 It feels nice to have some projects completed and the house cleaner and more organized. 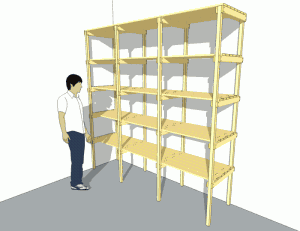 Over the past weekend I started a couple projects with the help of Kristin and my mom and dad. After successfully completing them, pictures and descriptions later – I promise, I started looking at actually tackling some other home projects that I had been considered. In so doing, I stumbled upon some internet sites I want to keep track of.

Firstly, I want to build some real shelves into the basement “storage room.” As my parents noted, the cheapo metal shelf supports I purchased aren’t holding up their end of the bargain. Get it?

Those look pretty interesting. I think I want to change just about every aspect of how it is done – making at least one section deeper, making it shorter, using plywood for the shelving surface, etc. but somehow having a base plan makes it seem much more achievable. The garage would probably be better off with them too.

I’d like to make that book shelf even lower and use it as a DVD/Game/media/center channel stand. I would modify other things too – for instance, I am thinking I could avoid the dowel work by using furniture screws, but at the same time I could use a drill bit and take out 1/2″ deep or so and put a short dowel in for the same look. Any thoughts on that? I think using screws would speed up the assembly considerably while reducing the chance of error as well.

Looking at that, I realized that high quality lumber, like Oak, is expensive but is what I would need to use in order to match the trim, etc. It would be a piece of entertainment furniture, so painting black might look good…

Tada! Instructions! The internet is great, isn’t it?

I have read that a desire to “finish” things is part of being an expectant father. It wasn’t something I had considered as a source of motivation, but I guess it works. Five months and counting…