Sitting at the kitchen table last night, I got tempted and hit the “change permalinks” button that is on the page where you create and edit your blog posts.  It worked out pretty well, I thought.  Then I tried to view my post – *bam* – every link on this site had been broken.  It took me twenty minutes of frantic searching that allowed me to find not only numerous plugins for WordPress that allow for redirection when you change your permalink layout, but the “permalink” options hidden under “settings” on the Dashboard page.  Sigh, crisis averted.

But now I really want to get back to those pretty permalinks.  If you click on the title of this blog entry, you’ll see it takes you www.teamjuchems.com/?p=178.  That’s lame when you consider it could be something cool like www.teamjuchems.com/2009/09/pretty-permalink-google-analytics (how much more awesome is that! ;))  This also allows your site to score better when indexed by Google, Bing, etc.  Anyway, it is a little more involved than just hitting that “Change Permalinks” button.  The only major task from that list that I have gotten done is to enable mod_rewrite in Apache, done via webmin.   I am not quite sure how to do the other bits, but I am guessing I will learn shortly.  The nice thing about self hosting this blog is that I am root and therefore can do everything myself and not hope that a provider will let me mess with settings.  Instant gratification (and site hosing) for the win.

Next up was getting Google Analytics tied into this site.  This was really easy, use your gmail account to login to www.google.com/analytics and get your ID.  Install and activate one of the numerous plugins that add the code for you (the one I used had been installed some 500,000 times, which is the highest number on a plugin that I have seen so far) and plug in that ID number.  Wait until Google crawls your site and its done.   And now I can see if people actually come to this site 😉

Finally, I realized that before making major changes (permalinks, new plugins, etc.) I need to make a backup of what I have.   I have sunk too much time into this little adventure to let it get messed up by a stupid mistake I make.  At some point I might even build up a test system which is some scary IT thinking following me home…

When it was time for me to move on to a more adult car it was fantastic that my dad happened to be looking for a car that was less practical.  Earlier this year, my dad bought my 1999 Yellow Mustang GT 5-Speed for what the dealer wanted to pay for it on trade in.   It was a good deal all the way around (I think), and my dad now has something to spend some money on 🙂 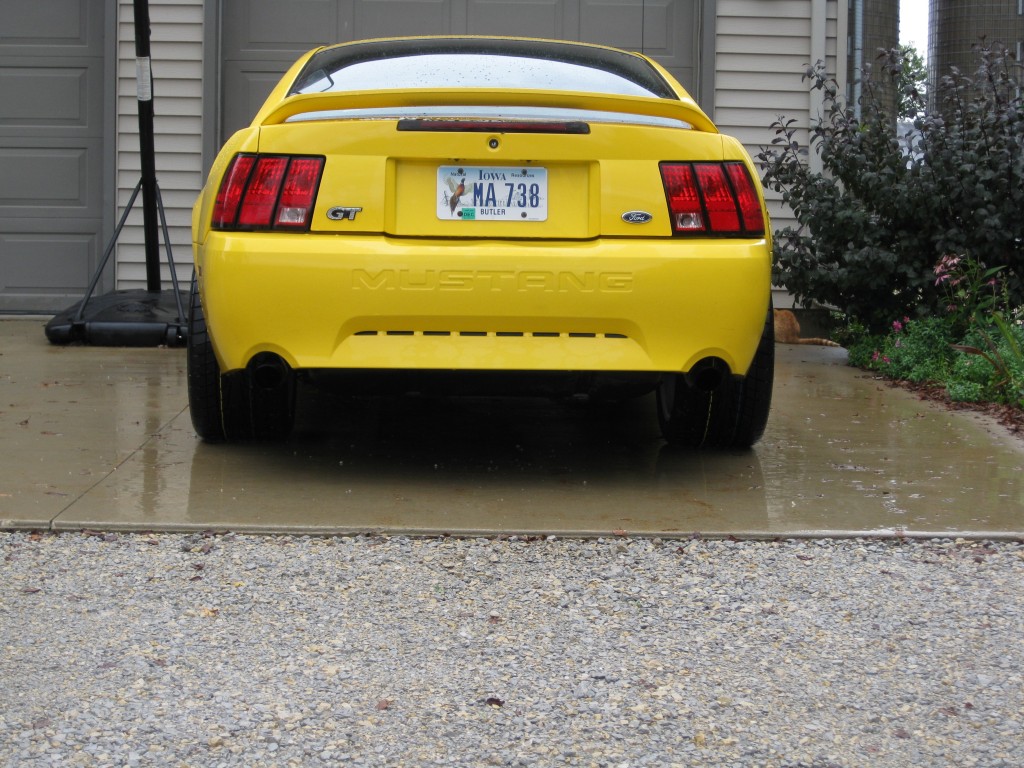 They look pretty darn cool.  I don’t know what he’ll improve on next, but that was a pretty awesome first move!  😀

Huge links on a draining day:

What I thought was the root issue.

And this got the issue over the hump.

After getting the DNS tests to pass, I did a topology rediscovery on the troublesome DC.  It came up with a new replication link with a funky GUID, and event logs all over the place indicated that AD said, “Oh crap, we had the wrong GUID for the PDC emulator all along!”

At least it (NTDS Replication) appears to work now.  Off to class.

Kristin and I went down to Ames this weekend along with the Mooney’s. After leaving late on Friday night, Derek and Meghan did a great job of driving us down there and we got to spend a little time with Liz and her house mate before enjoying the air mattress in the living room.

Saturday Kristin and I enjoyed awesome Pizza Ranch Buffet after dropping off Liz for her rehearsal and pictures. While Liz was there, I downloaded and installed on PlayOn so that we could see how much functionality could be squeezed out of Liz’s new xbox 360.  It seemed to work pretty well, but kept dropping out when we tried to watch Dr. Horribles Sing Along blog.  It ended up working on Sunday, but caused no end of frustration during the twenty minutes I tried to get it working.  I’ll blog more about that some other time.

I picked up Liz and dropped her off again when my dad showed up with the tickets with Mike Cooley.   Jason and Derek showed up shortly later and we all headed off to tail gate just north east of the stadium.    While we were tailgating, a helicopter circled and dropped a paratrooper who we believe delivered the game ball.  It was only about 4:30, so it was hard to tell what point was because the game wasn’t until six.

About 5:15 we headed into the stadium and were treated to a great performance as expected from the band and a surprising victory from the football team. 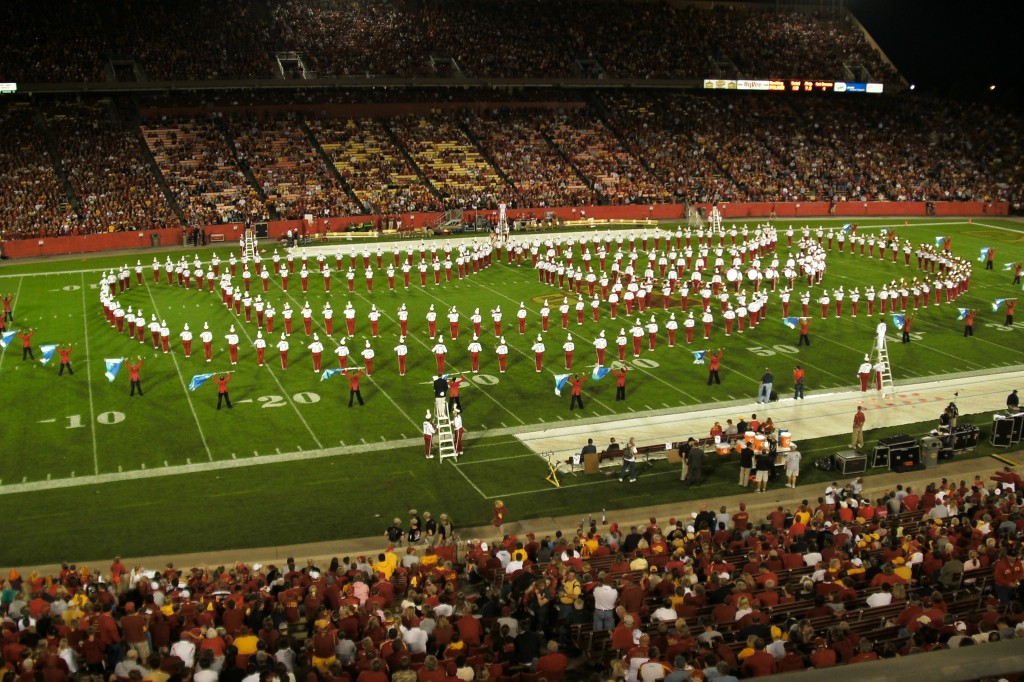 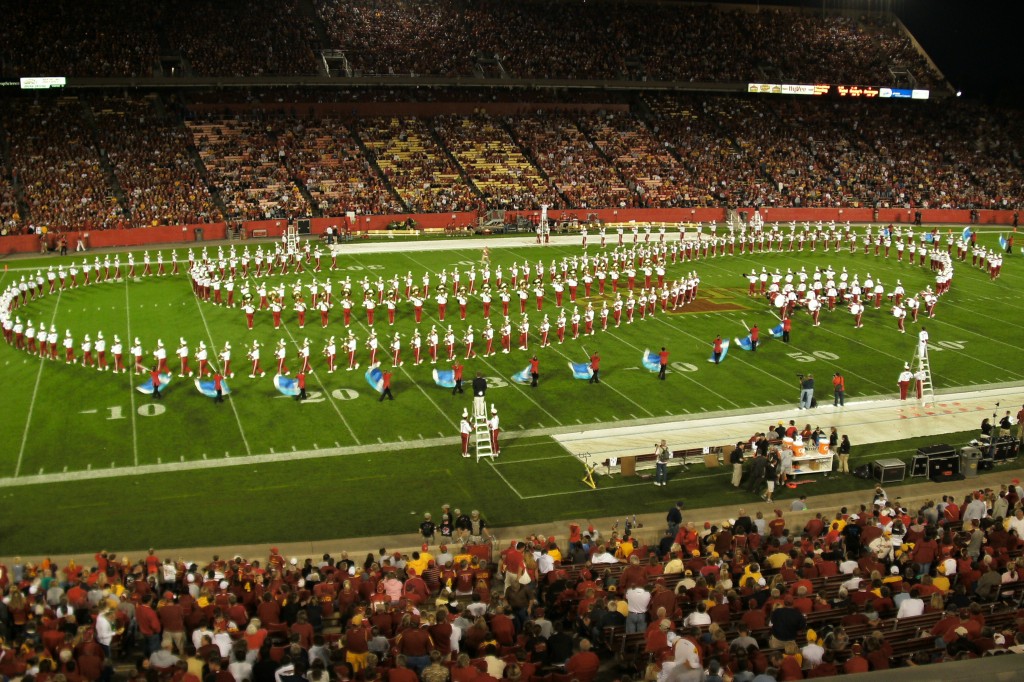 Sitting at the game, I got really thirsty.  Despite a raised eyebrow from Kristin, I decided to buy a cup of pop.  Kristin decided to get a picture of the cup to commemorate the occasion. 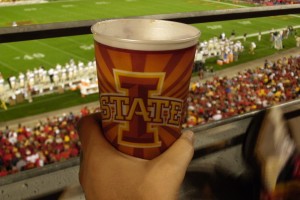 It was tasty. Yep.

We finished up the game, said goodbye to my dad,  hung out with Liz & Brad at Old Chicago, and that was our Saturday.  Liz seems to be doing really well down there which is really awesome.  “The Rental” in Ames is so much nicer than than “The Rental” was in Waverly that there really is no comparison. It’s really exciting that Brad is cruising towards both graduation and getting married next year, too.

Sunday featured some tasty Chinese food, hanging out with Liz and an uneventful ride home with the Mooneys.  Conversation is always good in the vibe… 🙂

It did work, obviously – but I was unable to edit the post.  Ah well, posting is better than nothing…

Something that has bothered me about this blogging setup since its inception was the need type “wordpress” at the end of my teamjuchems.com URL, https://www.teamjuchems.com/wordpress. Everyone else seems to have figured out how to get their blog into their root directory. I had setup my wordpress install into a “virtual” apache instance, so this wasn’t how it came up as default.

After trying to mess with an .htaccess file, redirects in Apache, etc. I scrolled down, in webmin, to the apache server management page, and guess what I saw:

As you can see there, there is a “root” directory. Previously it was pointed just to /var/www/, now it points to /var/www/wordpress/ and magically this made it so my blog was the root of the web server. Now, this broke a bunch of things and made it so I had to clear the cache of all my web browsers so I could login, but this should be its long term parking spot. I had also mistakenly told the virtual server that it was representing http://worpress.teamjuchems.com – this has now been fixed as well.

One win for the team, at least 😉

So, I’ve had an issue creating VMFS partitions from the GUI on the ESX 3.02 servers that I have built.   Given that I didn’t have it create partitions at installation because I wanted a bigger block size (its an 800GB local disk, so I want one VM to be able to use at least a majority of it, and the default 1MB block size means a .vmdk file is limited to 256GB, too small) so I elected  to wait until after the ESX installation. Doing this greeted me with a great “There was an unexpected error updating the partition table.”  Great, thanks for that descriptive error. So, to the command line we go:

You can align the VMFS volume as follows, before you do step 9:

Now I need to figure out how to set blocksize while running that command and I will be set.

Remember that the Shell is capitalized 😉

And the awesomeness has just been tempered as I realize that I have PowerShell V2 with the included ISE – but the only way to get this is to run Windows 7 or Server 2008 R2. I was hoping to get this up and romping at work, but evidently I’ll have to wait. As in “a few months.” Seems pretty ridiculous, you would think that Vista and 2008 would have support at the same time…  I was really hoping to do my VMware backups with this tool.  It’s still possible, I suppose, just a little more difficult.  Dang it.

This came out last December but appears to be the best MS can do for my 2008 Server  development box.  That’s a bit of a downer.

I’ve learned to trust the cold clone version of converter as my defacto conversion tool as you can be sure that it is going to do the job right the first time and not hit issues based on file system depth, etc.

The big question is where is this functionality with the newest version? Hardware support in the bootpe disc (especially network drivers!) is a big deal with newer hardware coming out. Let’s get it together VMware and release a new version. My cold clone CD appears to have last been updated in May 2009 – lame!

It’s one of those things you just don’t realize how cool it is until it just works.  The automatic windshield wipers on the Passat are pretty darn nifty.  On the interstate and while driving around, I don’t even realize them turning on and changing speeds; it just happens as needed.

Like the auto-dimming rear view mirror  it is absolutely not needed but adds to “nice” feeling of the vehicle.  It was raining off and on last night and this morning, not having to lift my hand up to the windshield wiper stalk  was pretty awesome from  a laziness standpoint 😉