If you were thinking about going to see The Losers, please do what I should have done and ago see Kick-Ass instead.  This is another comic book adaptation but it is done much better and the story is much more original.  It is about super heroes that don’t really have powers, ala The Watchmen but still take the world into their own hands.   This could have been the beginning of the world of the Watchmen. 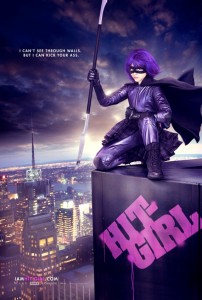 I am going to keep this short, because I think you should just go watch the movie.  It has the most dangerous 11 year-old girl that you will see on the big screen.  It is a little gory, and the pacing is a little slow to start with but it takes off and the cinematography and action scenes are pretty killer.  Nicholas Cage has a great showing, as do many other actors in this movie that you probably haven’t seen before.

It’s worth seeing in the theater.

Movies based on comic books, especially Marvell comics (Spider-Man!) are the types of movies that I really want to see in the theater.   The Losers is based on a comic book, I guess, not that I had ever heard of it.  It’s about a covert hit team that gets double crossed way down in Bolivia and then has to make some compromises in order to get back to the states so they can get answers, revenge, and their old lives back.

The movie has some great action scenes and some nifty cinematography that invokes the scene by scene transitions you would find in a comic book, I’ll give it that, and comic book based movies could make good use of this technique to great effect in the future.  The issue I take with it is that it takes a comic book and puts into our world, so when you are watching some of the scenes the suspension of disbelief is broken as you think “no way would that have worked.”  Movies like Spider Man or the Watchmen change the world enough so that you can take little details and shelve them and that makes them digestible as a whole.  Without having read the comic, I think what happened was the PG-13 rating and the decision to try and keep the setting light, which didn’t jive while at all with what was going on, they just made the good guys too “good.”  How am I supposed to feel sorry for these guys when they cause huge collateral damage to people in the way of their objectives?

I really enjoyed the character “Jensen” who has also played Johnny Storm (the guy who can start on fire) in the Fantastic 4 and Captain America in the upcoming Avengers movie.  The character is a ripped, geeky commando who wears the best t-shirts (lol @ the zombie t-shirts) but can talk to women without making a fool out of himself.  Compared to the utterly cliched Colonel and Bad-Girl roles that are present, it was at least refreshing to have a new type of role and reminded me a lot of Battlefield Bad Company 2 – which is a good thing.  As a side note, how can you be both Johny Storm and Captain America?  It seems like at some point that could become an issue, didn’t the Fantastic 4 at least encounter the Avengers?

Anyway, the movie has been panned as a forgettable action flick, which I suppose it is.

It’s worth a rental or Netflix queue addition if you do like action movies.

This show might be heavily steeped in sexuality and drug use but it was a fantastic show.  The emotional roller coaster was so strong and the characters portrayed so well that it is easy to see why it garnered so much praise.

But one thing I have to say about it, after watching so much TV lately, is that this a show that ended gracefully when it got to where it need to be and *paid off* in the finale in a huge way.  Its five seasons and probably about sixty five hours of your life (which is sadly about 13 days of TV watching for the typical American) but I can think of very few other ways to invest your time in front of the TV that might be more thought provoking or moving.

If you have a list of TV shows to watch, this should be on it.  You can get into it now knowing that it won’t leave you hanging on some random ending due to its being canceled.   More TV shows should go out like this.

Finally, everyone should have a pre-need on file at a funeral home somewhere.  Seeing how much strife it can cause the deceased family to have make all those decisions when emotions are running so high, it is only fair to those you love.

Jeff L. sent me the link to this site and I found it to be quite hilarious.  Its full of demotivational posters based on classic Star Trek. 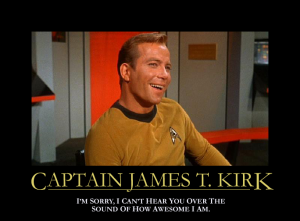 The Awesomeness is self explanatory.

Since there are many more, four pages of them, head on over to this great website and browse through them.  I think the hardcore Trekkies will get even more kicks out of it than I did.

First, watch this video of one of our esteemed Representatives in action:

Is that not ridiculously embarrassing?  Who ever voted for this guy?  Why isn’t this being mocked all over mainstream media?

That poor General/Commander/whatever, having to suffer that fool.  How ridiculous!

Thanks to Chris K. for letting me in on the joke.

The SR-71 Blackbird was always my favorite growing up… I had “Top Gun” book that detailed all sorts of planes, and I read it over and over, memorizing sizes, speeds, payloads.  Even now I remember that a F2-Phantom is faster than an F-16.

Anyway, it’s worth a read, so check it out.

The article mentions how important the plane was to the Cold War effort and how it out flew more than 4,000 launched missiles in its service lifetime.  The plane was only grounded because it was too expensive.  I also suspect that our spy satellites have reduced its usefulness.  Having spent a few minutes reading about the A-10 today, which came to be in the 70’s and will be in service until at least 2028 because we really can’t make something any more effective for any reasonable amount of money, I am in awe of what NASA and the Defense Industry was able to achieve in the 50’s and 60’s.  It feels like to me that must be the height of American aerospace engineering.  Certainly the F-22 and F-35 will be remarkable, but they are so expensive and so late; if you spend enough money something in the end will be made.

A coworker was stopping by to talk about some storage matters and noticed my PC background – he mentioned it looked awfully cold and wintry.  So last night I set about trying to find something green to use.  The willow tree in our backyard had some greenness to it, so here are a couple pictures of it. 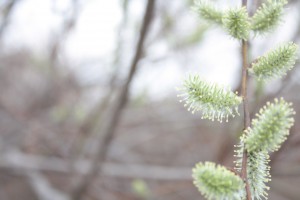 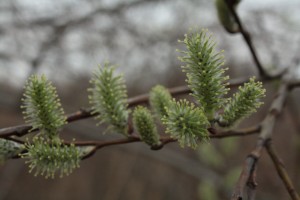 The nice weather really let me play around with my camera settings – I goofed with exposure time, f-stop and ISO speeds.  Taking pictures of stuff up close proved to be challenging with the auto focus, so I had to tweak what part of the frame I wanted it to grab.  After spending about five minutes trying to figure out how to manually focus the lens I gave up.  Ideally, I wanted the picture to not be too bright but for the green to pop out a bit.  Picture 2 ended up being closer to what I wanted, color wise, but I preferred the layout of Picture 1.  Paint.net came to the rescue (I’ve never really messed with picture alteration before) I simply dialed down the brightness and ticked up the contrast and came out with this. 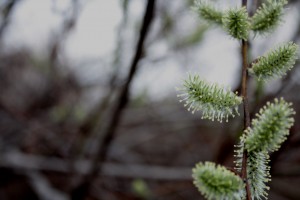 In with the green, out with the snow!  🙂

Sean brought a functional network in a box, Dave cooked up some tasty supper, friends old & new brought their boxes and I brought the dedicated servers and fun was had by all!

Check out the Event & Schedule page to see what gaming goodness went down and what people won.

Then look at some pictures we took; more should be posted shortly.

What’s next?  A “Ten Man LAN” in the upcoming months to rock out some Left 4 Dead 2?