Tuesday night I had to skip out of class a little early, but man was it worth it.  Seeing Metallica in the Target Center was pretty darn fantastic.

I have to confess that Metallica is my #1 favorite band by far, despite the horrid St. Anger release.  I’ve been listening to their new Death Magnetic album since Kristin bought it for me (thanks, babe!) just about everytime I drive anywhere.  That said, I really enjoyed the concert depsite how much they had the bass and drums turned up.  Maybe the aucoustics for where we were (up a bit) were just off.

Of course, I forgot to take a decent camera.  Crappy phone pics will have to suffice. 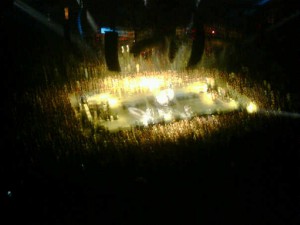 Blurry pic of them playing... 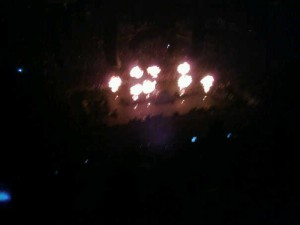 Thanks to Derek M. and Kevin for coming out for the concert.  I hope you guys enjoyed it too 🙂

If/when I got to another Metallica concert, I am buying a Met Club membership so I have a shot at buying good tickets and probably traveling to another venue.  The Target Center is fairly underwhelming.