This is a topic of conversation that Sean and I have been discussing lately.   What makes this so frustrating is that even if you buy really nice components, when you assemble them the PC tends to be noisy when compared to some $400 Dell or HP PC.  I’d even go so far to say that some of my cheaper builds have been quieter than my more expensive ones.  That and all the PCs I build for Jeff Lemaire seem to be whisper quiet, frustratingly so compared to the rigs I build for Kristin and myself.

To that end, I have set out to quiet the PCs in the Juchems home (thanks to Sean for bringing this up in his own quest to cut down on PC noise pollution.)  Some things to keep in mind when building your own quiet PCs:

I recently purchased an inexpensive video card from the online forums as part of package of inexpensive computer parts.  I didn’t pay close enough attention – the fan on the little x1650 card was two pin and spun incredibly fast and loud.  As this card is likely to go into my moms computer (hey, I might want to fire up a game on it for some easy LAN action back at the farm) it needs to be much quieter – this little $20 card was filling a room with sound and that made it pretty worthless.  This card doesn’t consume much power so only a little airflow is really needed and the fan was really pushing at 12v.  So I performed the mod linked to above. 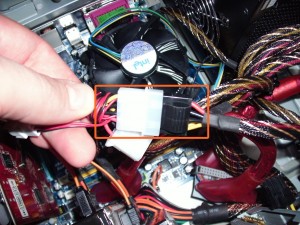 See how the yellow matches up with the red and vice versa? Prior to the mod, it was red to red and yellow to yellow.

The tools I used to complete this modification were a paper clip and a box cutter.  I used the paper clip to push in the “fingers” that held in the pins on the female end and then used the box cutter blade to push those fingers back out before reinserting the pins.  If you are attempting this, you’ll get what I mean by looking at it 🙂  I was able to carefully push the two pin female connector from the video card onto the three pin adapter without any other modification.

Since I performed the mod, the fan can no longer be heard.  It should be spinning with 5v rather than 12v now, meaning just under half as fast.  Now it will serve its purpose perfectly.

One word of warning – using this adapter as a pass through now will likely roast something like a hard drive.  Make sure there are only fans downstream of your connector.  You can daisy chain these four pin fan adapters to accommodate all of your case fans and you should only need to modify the first connector.