A while back, maybe a few years back, Kristin said that I should convert our tapes to DVDs and get rid of them.

She may have said this a few times.

Then it made it onto my official “to-do” list, and I am pleased to say that I am now taking this seriously and have acquired the means to do so.

At one point I thought I would just use Windows Media Center and record from the TV setting.  This seemed simple and genius – I have TV tuners to spare.

It also doesn’t work.  Sigh.  Some technical reasons that I don’t really get prevent this from happening.

From there I was stuck, but the Internet is full of information.   I found this article and promptly picked the worst, cheapest converter on the list.  Reviews at both Amazon and NewEgg convinced me that with a little perseverance I could make this work.  I’ve modified drivers, spun up Linux VMs to repackage installers, etc. so I hoped that I could make it work.

Turns out I didn’t need to hope.  This Kworld USB converter works fine with Windows 7.

The important bits were covered by this NewEgg review:

Here’s how it works. You plug the USB into your computer. You plug the audio cable into your computer input as well. You install the driver from the driver disk, then you install the two porgrams from the program disk which are both included in the box. You then hook your VCR up to the RCA or S-Video jack. You attach your audio cable from the VCR to the RCA Jacks. If you only have one audio cable, use the left channel. Open the Power Director program and use the capture tab on the upper left side of the screen. It should then look for the signal, and then show you what your VCR is doing on the little screen. To record, DO NOT use the red button on the program. I keep getting copyright protected errors. Instead, press the button on the kworld device (it’s oval and should have a green light lit next to it). It will start recording the video. Make sure you have it going into the file you want and in the proper format. It works, but could use much better instructions.

One brief stumbling block that I had was that I wasn’t getting any video.  Messing with the VCR, it appears that the front outputs are no longer working – ore are secretly inputs?  No idea, but plugging the cables into the back of the VCR brought up the image fine.  Issue number two is that there wasn’t any audio during the capture so the only way I could judge audio sync was by stopping the recording and watching the preview.  Not good.  Googling it led me to this forum entry and this answer:

You can always monitor the output audio of your VCR (headphone) or video camera speaker while playing back the video to be captured, or also use the windows recording mixer to monitor, so you can know if your material have audio or your audio channel is having any problem. But if you can find out how to monitor the audio level during capturing on PD9, please let me know.

It was really that easy, I opened up the “Recording Devices” control panel by right clicking on the little speaker system icon by the clock.  Then I checked this box: 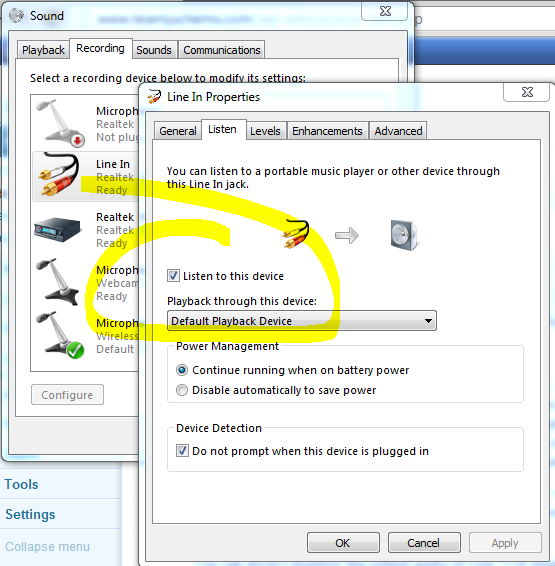 Now I can hear the capture audio while it is in flight over my PC speakers and have a good idea of the incoming volume.

Next up – re-encoding the files in Handbrake for portability.