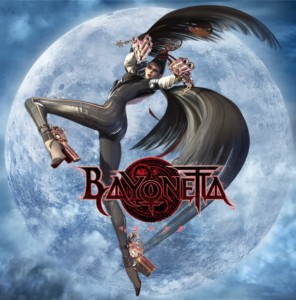 Yep, those are all guns... and the suit is her hair, which she uses to summon giant, boss eating demons. No joke.

Every once in a while you find something that is just unexpectedly interesting and fun.  A long while back , Penny Arcade mentioned a game they were super stoked about, Bayonetta.   I mentally bookmarked it and went about with my life, per the usual.  Fast forward a few months, and I had the opportunity to not only get some solid gaming time in, which is somewhat abnormal, but also some quality xbox 360 gaming time.

So off to Metacritic I went, very sure there would be many games I would want.  Well, it seems that the 360 has many shooters which rate highly like Halo 3 but I only play those games with a mouse and keyboard.   Its also fair to say that Grand Theft Auto games are exactly my cup of tea.  Other games like Bioshock and Fall Out3 I have already played on PC.  Which leaves… action adventure games?  Tops was this Bayonetta game, so off I went to a local Gamestop and traded in some games I was never going to play again (Sonic?  Ugh!) and picked it up used for $35.

What a great purchase!  I put a solid ten hours or so in over the weekend, and they were all awesome.  I enjoyed fighting games like Soul Calibur and this is like a fusion of that and Mario Galaxy – levels that don’t always make sense and crazy combo physical combat with plenty of blood and sexual references thrown in.  Even better is that the game is still plugging along even after that much play time with several more chapters to be completed.  Its one of those games where you tell yourself “one more chapter” and an hour and a half later you are telling yourself the same thing.

Watch this YouTube trailer – that pop music is the *actual* game music.  The boss battles are their own levels as the bosses take up nearly the whole screen.  There is a ton of stuff to collect and challenge levels sprinkled throughout.   This review really sums it up for me – a big plus is that it showcases the 360 hardware by running great and not slowing down.  I enabled vsync to get rid of the screen tearing on my ghetto LCD monitor setup.

Some things about the game annoy me.  The insta-death push button events that punish you (and your level score) with death and the choice to continue are not are irritating.  Being able to replay previous chapters to earn better scores or farm more crafting components both help to overcome this annoyance.

All that said, are there more games like this lurking out there?  Anything you’ve played in the last couple years or so that just shouldn’t be missed?